Description of the biomass CHP technology based on a thermoelectric generator

The CHP technology based on thermoelectric generators is an innovative and interesting application for the generation of electricity from solid biomass in small boilers or stoves. The electrical power range is from a few Watts up to a few hundred Watts. Thus, the technology is particularly suitable to cover the own electricity consumption of the heat generation system. Thereby, a grid-independent operation of the heating system becomes possible and the reliability can be increased.

For the operation of a thermoelectric generator (TEG), in addition to the heat source (biomass boiler or stove), suitable thermoelectric modules with an appropriate power electronics as well as an adequate cooling system is required. The heat transferred to the cooling system can be used in a water circuit or directly released in the living room via convection air.

TEGs are a maintenance-free and noiseless technology without moving parts. Thus, this technology is particularly suitable to realise a grid-independent operation of stoves or boilers, which are usually installed in residential buildings. A useful thermal power range of the heating system for the use of a TEG is approximately 5 to 50 kWth.

Working principle and integration in a boiler or stove

The principle of the TEG is based on the Seebeck effect, in which heat is directly converted into electricity by two connected and differently doped semiconductors placed at different temperatures. In Figure 1 the general structure of a thermoelectric module is presented and Figure 2 shows a thermoelectric module with (left) and without (right) ceramic substrate.

Since a good heat transfer on both sides of the TEG and a high heat transfer through the comparably small surface of the thermoelectric modules is essential for a high electric output, a special focus has to be put on the heating and cooling of the TEG. The hot side of the TEG is positioned in the flue gas path of the heating system. Thereby, high flue gas temperatures and a complete burnout of the flue gas before it passes the TEG are essential. To cool the cold side of the TEG different cooling options are possible:

Figure 3: Schematic diagram of the integration of a TEG in a pellet stove

Since a high electric power output strongly depends on the temperature difference between cold and hot side of the thermoelectric modules an appropriate heating and cooling of the modules is essential (see Figure 4). 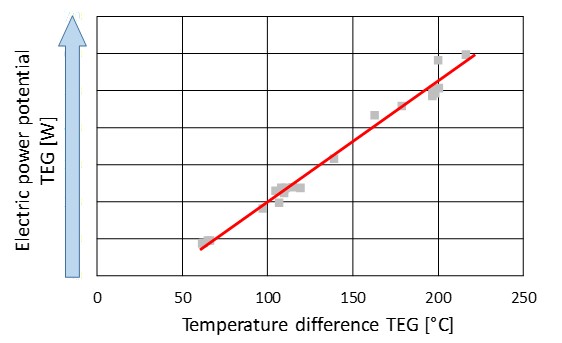 Figure 4: Dependence of the electric power of the TEG on the temperature difference between hot and cold side

Typical parameters of a TEG integrated in a biomass heating system:

Realised projects and further information regarding the thermoelectric generator

BIOS in co-operation with the pellet stove manufacturer RIKA has successfully developed and tested a TEG technology for pellet stoves within the ERANET project „Small-scale biomass based CHP“. It could be shown that the TEG is able to produce more electricity than consumed from the pellet stove, thus an energy independent operation of the pellet stove is possible and even some excess electricity is produced which can be used for charging mobile phones for instance.